10 Things we learned this time. 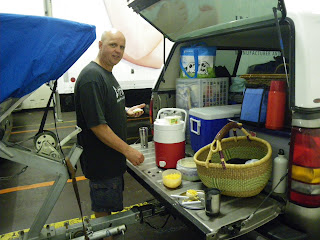 Every time we have to get up and catch the 6.30am ferry from Horseshoe Bay, we wonder why we didn't book on the 8.30am sailing. However, we didn't, so Friday we heaved ourselves out of bed at 4am, packed the cooler boxes, left home at 5.30am and headed off to The Republic. Not so easy hitching the boat to the truck in the dark (lesson #1). Thus far it's been light when we've left. Note to self: get Nev to put in light on lower parking spot. B&B will need it duing 2010 Olympics anyway.
This time we did a tailgate breakfast with the usual B&B leftover buttermilk biscuits (signature item at The Tree House) and as usual with the new ferries we were stuck among all the overheight/overlengths ie 18 wheelers, buses and RVs. The whole Lions Bay Climate Action Task Force volunteer experience has had me quite frustrated lately (see my post title Green Volunteer Grouch) so I have to say I wasn't quite in vacation mode at that point. I was also pretty sleep-deprived, what with a sleepless night during the thunder storm, a late night packing the night before, and two very early starts. I can be quite miserable when I'm that tired (no comments, Nev).
In fact, I don't think I started unwinding until about 2 days later: unusual, for sure. But we'll get there.
We got to Gorge Harbour Marina on Cortes Island in the early afternoon as planned and managed to set up camp before the rain started. For the record, it didn't stop except for a couple of watery sunny patches, and it's still raining if it's anything like the weather here in Lions Bay today. We got The First in the water at high tide - perfect timing for us, around 6pm. They only charged us $5 to launch when it should be $8 and we told them so. Lesson #2: it's not worth trying to pay more when someone wants you to pay less. Just pay the $5 even though you are not in a kayak. 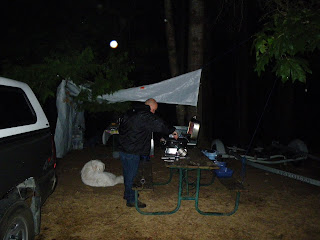 We went back to our little campsite, which looked more like a squatter camp by now, what with tarp for outdoor BBQ area etc strung up. We were the only tent there.
I had prepacked and frozen chicken pieces in various marinades, and we chose to BBQ my tandoori chicken, with rice and curried chickpeas I'd made a few days before the trip. Yum. (Recipes at end of this posting specially for Julie.) Those prepacked meat packs worked really well (lesson #3 - do it again). 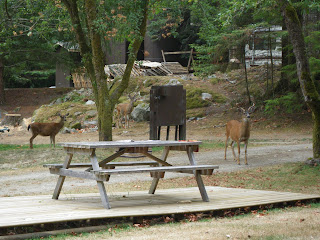 Got to bed early and slept late because we had a so much rain and even a bit of wind. The sun came out and so did the deer that wander around the camp site eating the little green apples that fall from trees that were probably part of the original orchard.
Decided to go check on The First, but it didn't seem likely we'd be going anywhere given the weather at Gorge Harbour, which is on the west of the island. However, Squirrel Cove was a whole other story: we just had to go over to The Republic. Lesson #4: when camping, always apply sunscreen, because you never know when you're going to be spending time outdoors! Although I didn't get burnt badly; no sting even, just a little heat.
It was so amazing to be back on our piece of paradise. I do so love the ocean when it's battleship grey, everything's a little desolate, and the cries of the eagles and the gulls sound completely forlorn...
We unloaded the siding to above the highwater mark, but then it started raining again, so we headed back to the government dock. One thing about an aluminum hull is that it's a rough ride when there's a swell of any kind. Kinda fun though; every 7th wave is a big drop like a funfair ride.
That night it thundered and lightninged like crazy, which Yukon did not enjoy one bit, although he was as always very well behaved. I got him to lie next to me, which happened to be where we had a few minor drips in the tent, mainly because the fly sheet doesn't cover the 2 sides where the "windows" are. All in all, the tent held out really well. Every now and then a little waterfall would fall off the "portico", as we jokingly call it: the little entryway where we store the cooler boxes. It's not water proof, and unfortunately that's where Nev left his hiking boots so they got completely waterlogged (lesson #5 - keep boots inside tent). 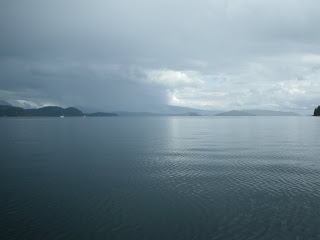 After all the rain and storm we'd had, it was amazing to arrive at Squirrel Cove on Sunday to see the sea as smooth and silvery as as taffeta, hardly a breeze to be found (lesson #6: the weather differs from spot to spot on the island). But we could see the weather moving in from the southeast, so we knew the trip to The Republic would a quick one. All we did was carry the packs of siding to the site of the shed and make sure the tarp was still firmly in place for the winter. I have to admit, the site we've picked for the bunky is truly sheltered from the worst winter winds, because it's on the northwest side of the lot. We will definitely have to take the dock around there for winter storage. 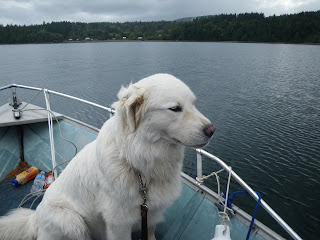 Yukon seems to have taken to the boat in a big way. He climbed onto the bow and sniffed the wind like a wolf. It was hard to believe this was the dog who wouldn't get in a car when we got him. Lesson #7: it can be done!

Sunday night we BBQ'ed again under our tarp. In the rush to leave The Tree House, I ran out of time to cut herbs from the garden and take them with us. I usually put them in our veggie packs. Although I have to say, lemon juice with our "French condiments" (see pic) is always a pretty good combination. 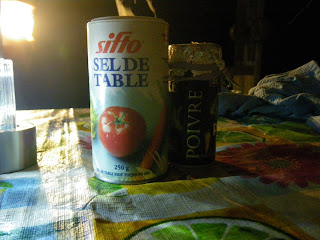