If ever there was a wake-up call to those who like to spout off about sustainability being a three-legged stool, the devastating oil spill in the Gulf is it. Only because it's topical and top-of-mind, because there are plenty other signs that have been ignored.

Back to the spill. Here's a prime example of how people and their economy cannot exist without the environment, although the environment would be hugely better off without either.

Experts have been stating for years that the biggest threat to mankind is global warming - crops failing, flooding, droughts leading to wildfires. What does it take to get the message through that, without a healthy planet on which to live, humankind is doomed? With or without money and jobs. Doesn't matter - you kill the environment and humankind dies, too, no matter how much money you have.
Posted by Penny at 1:45 PM No comments: 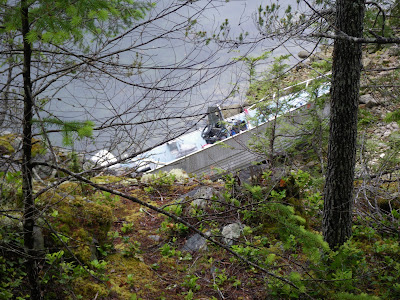 Our first trip to The Seagull Republic this year did not start well. Firstly, it was supposed to happen over the Victoria Day weekend, but in the end it happened the weekend after. Work and ferry reservations didn't work out.

With so much work and a milestone birthday in this particular week, I scrambled to get everything packed the day before, mainly food since we were booked into Cortes Island Motel for this trip and so we didn't need to pack camp gear (which is the easy part since it's mostly prepacked). Needless to say, this didn't work out so well. Lesson 1. Plan and prepare properly... no garlic for Nev's famous BBQ acorn squash is a major no-no. Never mind other essentials such as a spare pair of jeans (it was raining), the right boots for wading, you get the drift. It was way too cold still for my ATS's (All Terrain Sandals) which the locals certainly commented upon more than once. I'm sure we're the wrong kind of legends already.

Lesson 2 we learned or maybe didn't, we don't know. We thought we did everything right to start with. Suffice to say we got all the way to the Horseshoe Bay Ferry Terminal and then the boat trailer came off and crashed into the back of the pickup. Dinged the tailgate slightly, blew the whole canopy window out. Gave us a fright I must say, sparks all over the road and all that. But how could the trailer NOT have been on right if we got all the way down through the Village (including over the speedbumps at the school), all the way along the Sea to Sky, through the U-turn at Caulfeild, only to have the trailer come off when we were slowly cruising off the highway? We do recall there being autoglass in the prow of the boat when we bought it and now we think this has happened before. We'll never know, but we did replace the ball at Skipper's Marine in Nanaimo.

Lesson 3 was a reminder that no matter what, take everything you need plus some spares since buying on Cortes is not really an option a) because they might not have it and b) Squirrel Cove Store is even more expensive than the Lions Bay Store, which is quite an achievement. So when we got to the motel (same crappy room as last time because we have a dog) and found there was even LESS in the kitchenette than last time, life got just that much more difficult around dinner time.

Oh, and when I say take everything, I mean it - a spare watch would have meant a great deal indeed on Day 2. As the main picture shows, you gotta keep an eye on the tides, so if your watch says it's 10.03am, and when you look again it's still 10.03am and you haven't actually CHECKED on the boat with your own TWO EYES, this is what happens. That's LESSON 3 right there. It didn't really matter because we worked till late anyway. But it is an important lesson to learn. It would also help to learn it the first time since we managed to forget the boat twice (on day 4 as well). Not a problem of course when you have a dock, which we don't yet. 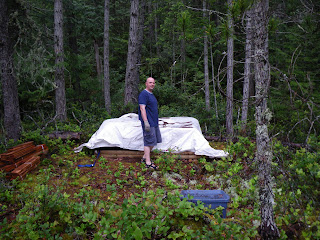 Good news is that everything was as we left it in September - the tarp hadn't budged (pic on left) and we did manage to get a lot done on the outhouse. Yes, I know it must be the longest building phase in the history of 6' X 8' structures, but it is perfect. We bought 3/8" sheathing so it's no longer a shed structure, but will be a complete mini-house once it's done.

We erected the three walls we had framed last year and stick framed the fourth. This provided me with the yurt (square) I have always wanted :) and a dry spot to keep lunch and other stuff. 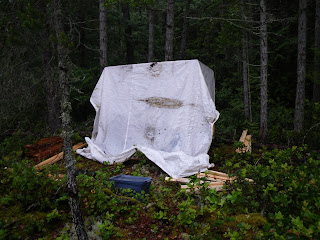 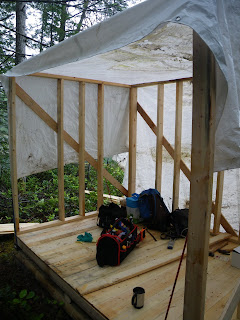 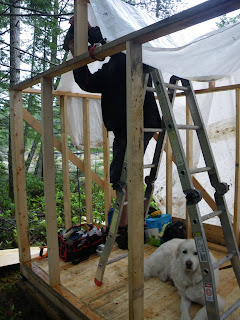 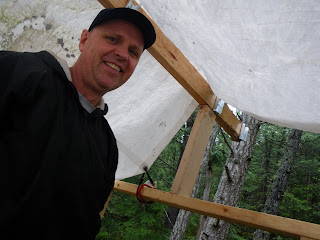 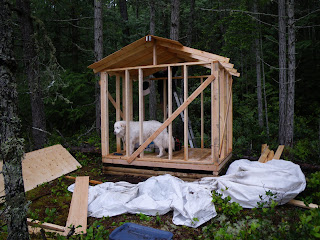 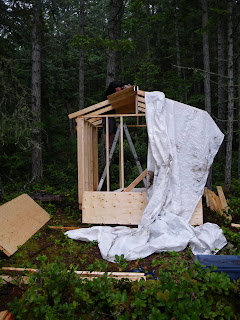 It rained the entire day and we got pretty wet even though we used the tarp to mitigate the wet and did the roof sheathing first. Yukon was one soggy doggy indeed and he doesn't much like being wet. Once the roof sheathing was up, we convinced him to lie in the slightly dryer area inside the outhouse, but he was still so overjoyed to be leaving at the end of the day that he actually jumped into the boat ahead of us! Highly unusual although I must say on this trip he was in and out the truck and on and off the boat like he's been doing it for years. 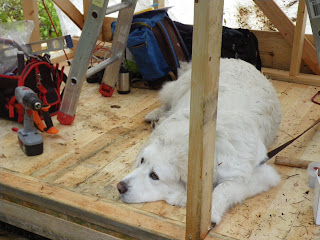 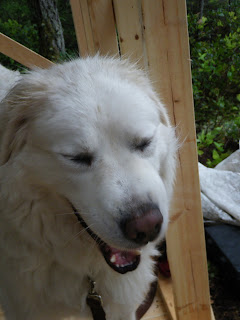 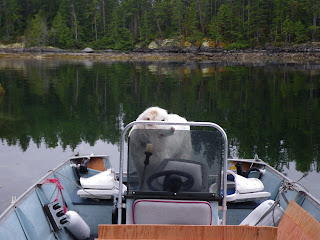 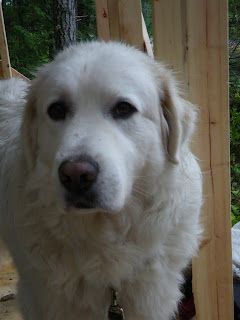 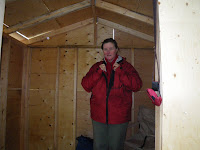 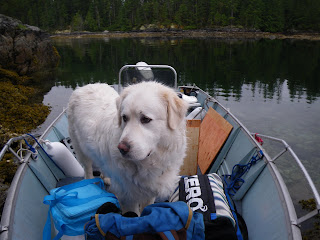 This is what it looked like once the sheathing was on. And this is what 5 layers of clothing looks like on.
Lesson 4 was a little more serious: when we tried to leave the Republic and head back to Squirrel Cove on Saturday evening, I pushed the boat off before we got the engine started (lesson 4.1). The engine never started (lesson 4.2) and we had to row to get back to our little cove. Finally after much flooding, we did manage to get going and putter back to the Government Dock and we learned lesson 4.3 the next day, which was completely wasted work-wise because we couldn't start the boat until a friendly guy called Ben came home from work and got it going on Sunday night - wouldn't take any cash at all for helping us, which is one of the reasons we love the island. 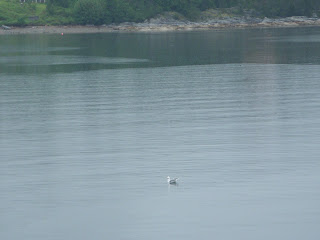 While Neville tried to start the boat, I whiled away some moments taking pics because it was one of those beautiful silky-grey mornings with not a ripple in sight. 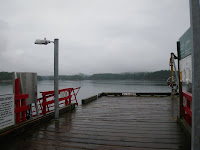 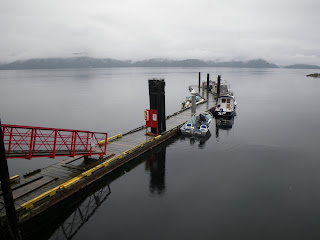 Of course, Sunday was the day it hardly rained, but on Monday as we headed off to resume our work, it was raining again. But we did get the roofing felt on and now we're set to finish off the door and cladding on the next trip... and get the composting toilet in, I hope, because THIS time we're going to spend the night on The Seagull Republic. Unless of course anything goes wrong. The really exciting part is we can leave all the camp gear there next time, which makes each subsequent trip SO much easier. 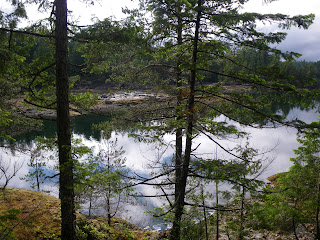 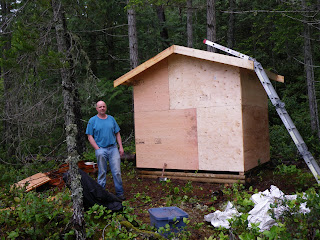 But the biggest lesson we learned this time is how little we really need to be comfortable on our land: a tiny bunky is our next big goal... life is so much better when one can get out of the rain and enjoy it! Of course, while we were getting ready to leave, the sun came out. What you can't see in any of our pics is the eerie sound of the wolf pack howling. Quite something to experience - it's chilling even in the middle of the day. So maybe that bunky is a prerequisite to spending the night on The Seagull Republic!
Posted by Penny at 4:16 PM No comments: