How we came to sleep in the outhouse. 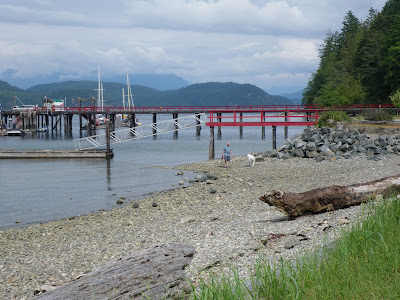 We just completed our longest visit to the Seagull Republic and (drumroll, please) we spent our first night there ever. We went up on Saturday, June 26th and came back Saturday, July 3rd. Sadly, our Simon & Garfunkel reunion concert has been cancelled, so we didn't have to rush back for that on the 3rd. 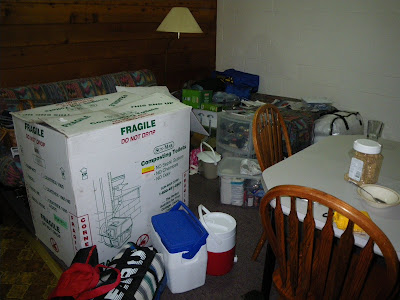 The Traveling Toilet in the motel Room, awaiting its final journey!
Having booked just two nights in the Cortes Island motel, the plan was to install the composting toilet in our now enclosable outhouse (see blog entry dd June 2nd) on day 1, and then camp in our large tent ("instant cabin") as soon as that was in. However, we ran into Scott, other half of Delia, a local couple we met 2 years back, while waiting for the tide to get high enough to launch the boat when we arrived, and he echoed an opinion we'd been offered before that camping in wolf territory with a large dog was not a great idea. Neville was still pretty gung-ho, but I think the wolfpack decided it once and for all when they set up howling and yapping while we were there on Sunday.

Judging by the noise, it's a huge pack and we heard them several times a day. Although it seems they're still in the Von Donop Inlet area on the other side of Squirrel Cove, wolves travel fast and we know they've been on our land because we have found deer bones and bits of seal on what we fondly call "The Killing Field", a flat piece of land at the highwater mark where we unload the boat.

What to do? We desperately want to be able to stay on The Republic and leave the motel with its 70's sun filter drapes and brown lino for the last time. And then it struck me: build a lean-to outhouse on the side of the already-built outhouse and sleep in the outhouse. Make sense?

So we spent Sunday sketching out a new "room" for what was to become in effect our bunky, and on Monday I "popped" into Campbell River to buy all the lumber while Nev stayed on The Republic to continue putting the cedar siding on our wee house. 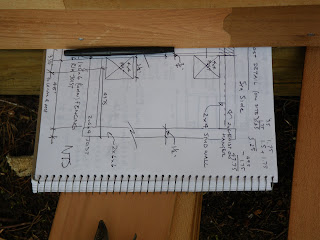 Let me explain what popping into CR really means... it means getting in the ferry line up from Cortes at least an hour beforehand to make sure you get on the boat (I did), doing the usual chase across Quadra Island to catch the ferry to CR from Quatiaski Cove, and then doing the 10 minute trip across the strait. The glitch being the Quadra-CR ferry was full when I got in line, so I had to wait for the next sailing. Once in CR, I headed straight to Home Depot... yes, yes, disgusting big box store and all that, but it is on that side of town (not hard in a town like CR) and we had decided to suss out those ugle pre-cut lean-to kits in the interest of a quick build just in case it made sense. Turns out they don't sell them.

A sweet young thing helped me load up my cart with 2X6's, 2X4's, floorboards, rafters and a bunch of other items (I got their last 14 joist hangers!) and even made several cuts for me free of charge. By then I'd been there over an hour, and since they don't sell shakes/shingles, I still had to head out to the the mill to buy a bundle of shingles! So much for my dream of a quick detour at Starbucks to catch up with my inner city girl.

Get to the mill and the sign on the office door said "Office Closed - please speak to Larry in the mill". In true Canadian style, although everything was wide open, Larry and everyone else were nowhere to be found. I had almost given up hope when I spotted him shovelling wood chips. After shoving a $20 bill into his hand,  I had just enough time to race back to the ferry terminal where fortune smiled upon me when BCF staff loaded  those of us heading for Cortes first, to ensure we'd make the 5.05 from Heriot Bay to Whaletown! Phew!! 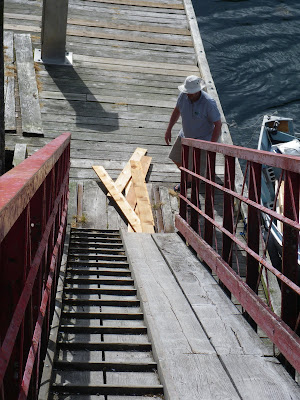 We loaded most of the lumber on the boat while the tide was high-ish on Monday evening. Our new trick is to let it slide down the ramp by itself! MUCH easier and way more fun. Guess which lazy bugger thought of that (moi). 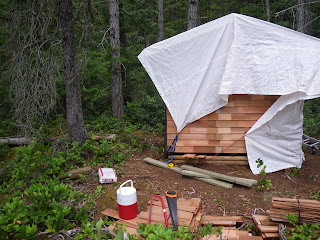 Tuesday we started building: site clearing meant cutting a log and some scrappy selal. Once we put in two posts, we built a real quick floor system. 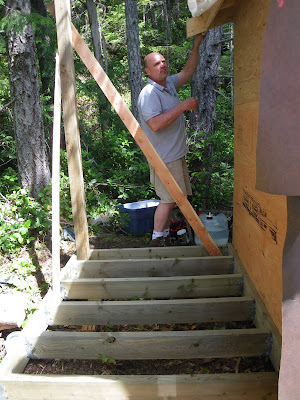 Then the floorboards went in, and the cedar barn board siding, which seemed like a quick fix for the non-rain wall. 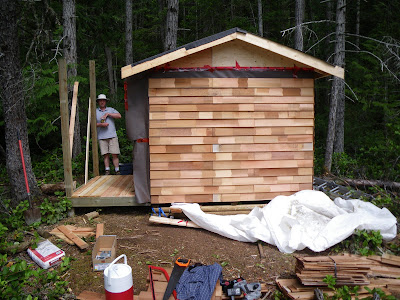 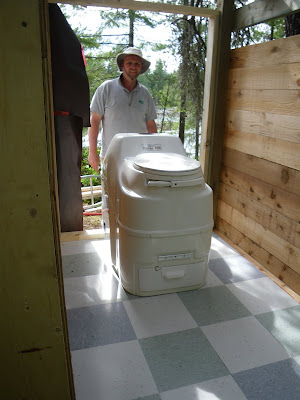 Before framing up the back wall, I did the VC tile flooring which was left from our Lions Bay reno in 2005. Lesson learned: that adhesive is an utter misery to use - it sticks to everything, inlcuding skin. Then we put the composting toilet in so we wouldn't have to carry it further than necessary. You can see it's rather, er, large.
By the end of Wednesday our new throne was usable. It's pretty open to the breezes, so there's plenty ventilation. We'll probably keep it that way by closing the view ports (woops - AutoCAD term there) with bug screen. 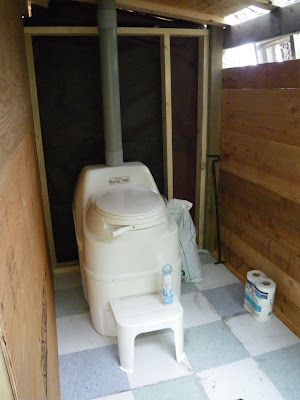 I made it sound easy, but it wasn't. We discovered, even after all our planning, that the roof line would be too low if we installed the rafters on the vertical, so we ended up using them on the flat, which means it's still tight, but a normal size human can still sit on the WC with an inch or two to spare above their head. We also couldn't follow the existing roof line, so we used a different pitch and it looks quite nice. Another woops - somehow one of our carefully installed 4X4 posts must've been bumped and was not quite plumb - if you look you can see it in the pics. This made nailing the siding on a pain since we were using pre-cut lengths.

In the interests of getting the thing built as quickly as possible, the designer on site (moi) had to drill, saw and hammer whenever a tool became available, ie when the construction manager was doing something else. For the first time ever. Sometimes I impress myself. No wonder it rained on Thursday. 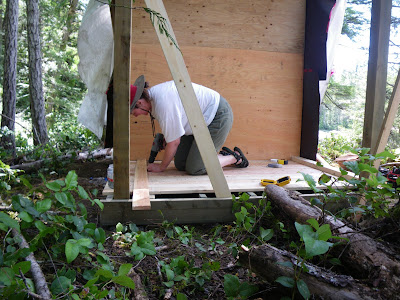 Ah - Thursday! Canada Day! We packed up all our belongings and left the motel for the last time.After unloading everything on The Republic, the first thing we did was hang the Maple Leaf and I sang O Canada. It was a very still, grey day, unlike the previous two days when we had some serious SE wind (which is the winter wind). It was surreal. Who'd have thought, when we arrived here almost 10 years ago, that we'd be the very lucky owners of not one, but two beautiful pieces of BC? We are sooo blessed. 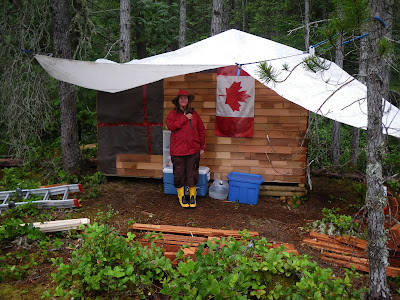 After that it was back to work even though we were so tired it was hard to move. And before dark Nev got reaquainted with an old camping tradition: manually pumping up the airbed with a beer in hand. He hasn't had to do that since I bought the new mattress which comes with 12V pump! No such luxury on The Republic yet though. Yukon had never seen the pump before and did not know what to make of it! I think he thought he needed to protect Neville from the new wierd beast. 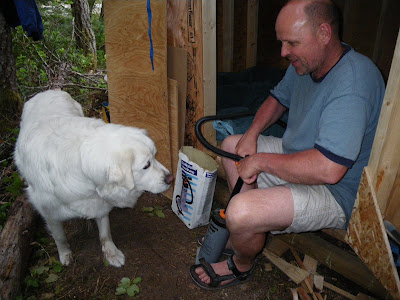 To use a realty term, our little bunky turned out real COSY. The mattress took up the entire floor, which meant Yukon got to sleep with us, which he's never done before, and he's now 135lbs of dog!! 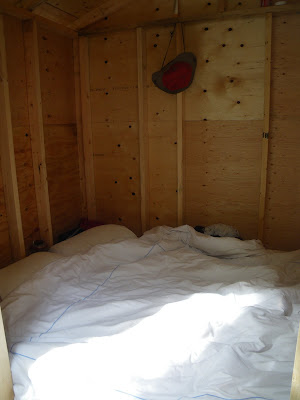 Notwithstanding the cosiness, it was pretty chilly, so I struggled to get to sleep... and when I finally did, I was woken by Nev who'd gone to check on the boat (no dock, so we have to be sure it's floating with the tide as per lessons learnt last visit). "I think the boat is sinking," he said. My first thought was, "what on earth did we do wrong THIS time??". Although I didn't think it that politely. The F word was in there somewhere. Fortunately by the time we got back down there, the boat was floating, bilge pump going like crazy and all we can think is that the boat got caught up on a rocky ledge, starting filling with water, and then dropped off whatever it was caught on and righted itself. Phew again!! 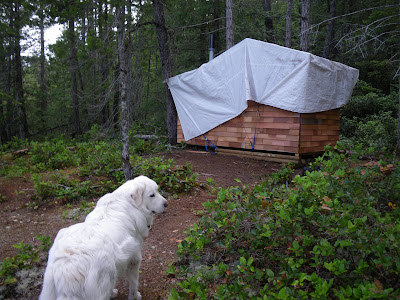 This is how we left it till next time; next time we hope to finish the roof.
For those of you who haven't nodded off while reading this blog, I can tell you, in closing, that we did manage to have a little down time while we were there, with Rick stopping by and us stopping to say hi to Scott and Delia who were at Nan's place putting in a new deck for her. Very civilised and a wonderful  taste of visits to come.

We have decided to build a larger cabin next year (don't get excited, it'll only have a 400sf footprint), and are seriously researching putting in a dock. On our next visit on the August long weekend, we intend to install two bunks in the bunky so Yukon has place to sleep on the floor. And we hope to finish the roof and do away with the tarp! 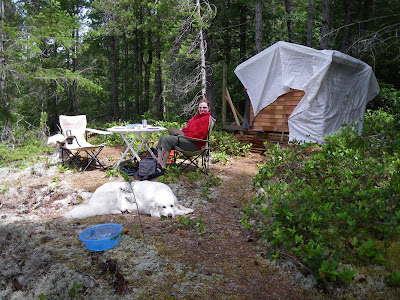 One could almost call it civilised! 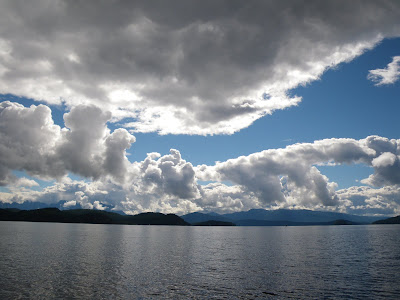 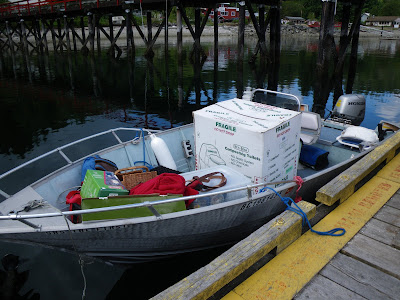 SRS The First loaded and ready for the Traveling Toilet's last voyage. 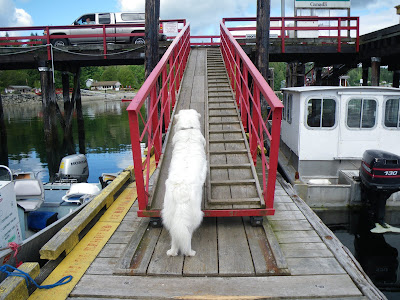 His Royal Cuteness staring anxiously after Neville at the govt. dock. Cute from any angle! 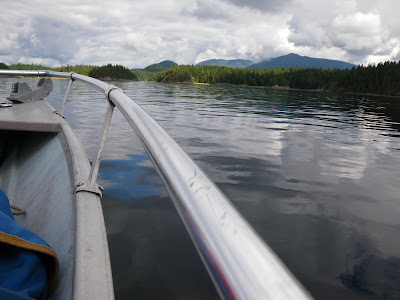 Water like glass.
Posted by Penny at 4:03 PM No comments: