Oh the responsibility! Oh the angst!

Now that we're seriously thinking about the design of the main house, the responsibility we have to this pristine piece of planet in our care has hit home with a large bang. As in being hit between the eyes by a puck off a Sammy Salo slap shot.

Although the lumber on The Seagull Republic was harvested at some point in time, some old-growth still remains, which is why Rick the Seller made sure there were tree covenants in place when he sub-divided the lots for sale. So OK, maybe it wasn't pristine, but the regrowth is so substantial one would hardly know it must've been naked rock out there for quite some years. Not for nothing was it called Boulder Point.

Every detail has to be considered... for example, we need a dock, but we need to make sure sunlight still reaches below it so that the starfish and seaweed et al will continue to survive under there. We need to anchor the house to the rock, but we want minimal foundations so that we don't disturb the land too much. Where does the greywater go? Or worse, the black water? After all, no point in paying some dirty diesel powered boat to come empty a tank and take it somewhere else - kinda defeats the object, doesn't it?

And how do we design a dwelling that blends into the landscape, and doesn't disturb the ridgeline? We want to do it in such a way that sailors approaching Squirrel Cove hardly notice that there's anything there? More accurately, WE don't want to see anything destroy the view WE have when we sail up to our beautiful piece of land!

Hence the angst. And the overwhelming sense of responsibility. And the hope that we will not screw it up, because whatever we do could change the land forever, or maybe not, if we tread lightly enough so that nature can take over once again when we're gone.
Posted by Penny at 3:35 PM No comments:

It's been a loooooong winter.

Looking back, I realise I never wrote an end-of-summer post to explain that we in fact finished our bunky so that it would be fully closed up before winter. So anyone looking at this blog wouldn't know we now have an actual bunky on The Seagull Republic, aka Basecamp 1, I guess.
I posted pics on facebook, but somehow I forgot the blog. I got busy, what can I say?
Delia and Scott put us onto Pierre, who lives in Squirrel Cove, recommending him highly because "he has both skills AND tools"! No mean recommendation since his tools were all cordless as well! At $20 an hour we reckoned it would be well worth getting his help to install the 2 brand new, energy efficient windows we bought at Re-Store for some minimal amount of cash (less than $50 for 2). You see, we realised we needed some ventilation, light, and a VIEW from what was originally supposed to be the outhouse (see previous postings) if life in the bunky was going to be worth living.
But most importantly, we needed to be sure the bunky was ready for the rain and winter winds. 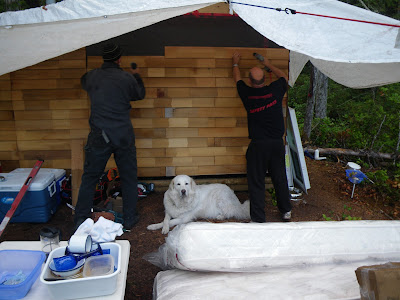 I think the pics tell the whole story. Here's the bunky when we started the last trip - tarp on top and no windows.
And look at this cutey-pie slider! 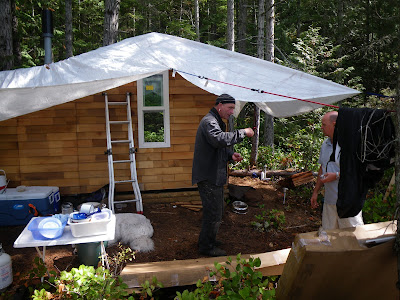 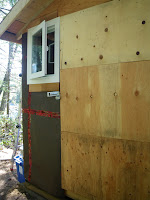 And this is the little casement window on the other side for cross ventilation. Of course the joke is the windows are the only part of the entire building envelope that actually have any insulation value whatsoever! 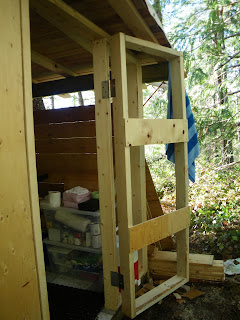 While Nev and I worked on putting on siding and roof shingles, Pierre built a real door for the outhouse. 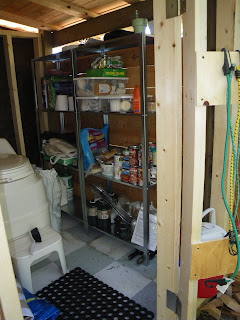 IKEA had these handy-dandy galvanised shelving units at around $10 each - the perfect size for storage down the side of the outhouse. So I valiantly squared up with the spiders (all relegated to the forest, along with the crickets, quite safely) and tidied everything up. What you can see here is canned food, gas cannisters and such items - things that can stay behind for next time. I have to say it worked out real well. 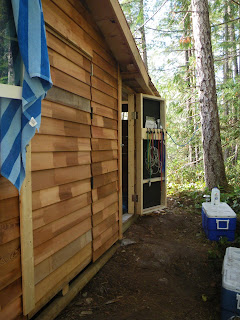 And here's the forest side of the bunky with all the siding in place. 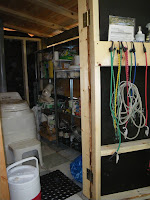 There's even storage in the door. Small space living at its best!

Here's our bunky - all done. The section on the left below the sloped roof (the non-rain side) is where we've piled left over lumber and other building materials such as housewrap but it's designed to be a woodpile eventually. Although from what I can tell, having a cabin means having a pile of building materials on hand at all times. 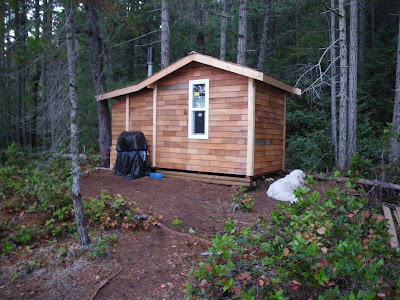 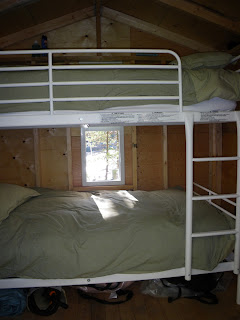 It wouldn't be a bunky without bunks... it's a real luxury to sleep in a real bed at the end of the day rather than in a tent on the ground! Makes all the difference. There's loads of storage space under the beds. When we closed up everything to leave, we put plastic over the beds - the plastic the bunks came in. We also packed the cooking gear, crockery and cutlery into the totes, as well as clothes and stuff, so the dust won't get at them. We'll see whether things got mouldy and/or dusty when we make our first trip there in the spring! We're really looking forward to making more progress this year: our main goal is to build a deck outside which will be the outdoor living area. Being off the ground, which is either wet or dusty, will make life a lot more pleasant!
Then there's the shower fund: I've been collecting loonies towards buying an instant hot water thingy from Canadian Tire so we can have decent showers. This will be the ultimate luxury!! Those showers at Squirrel Cove are too disgusting for words... eeeyooo.
I said in a previous posting winter is the time to plan and, with that in mind, we have been giving plenty of thought to the design of the main house, the dock and more. We went to the Vancouver Boat Show where we spotted our next boat (haha!) but more importantly we spoke to several companies that build docks. We're currently thinking a cantilevered dock might be a great idea so that the ramp is not damaged if a winter storm batters the floating portion of the dock.
I think I might have a way to build the main house in phases, so perhaps we build a small 1st phase in order to enjoy life on the sunny side of the Republic more quickly. But before I can start working on that, I have to finish the project in Nanaimo. And therein lies another tale, and a whole 'nother set of problems!
Posted by Penny at 5:47 PM No comments: